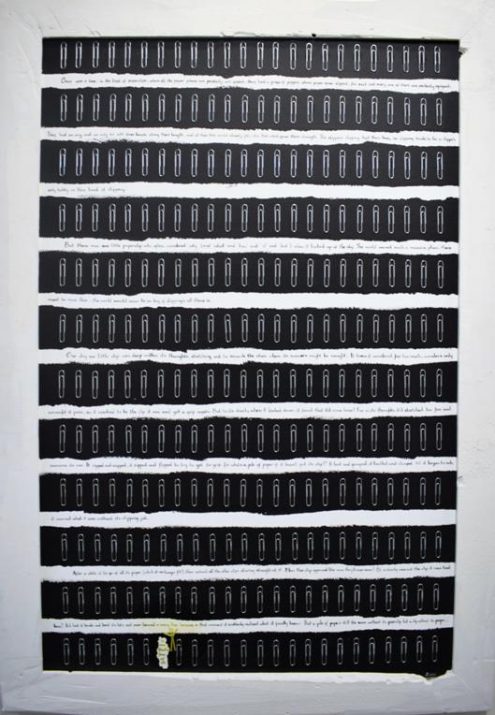 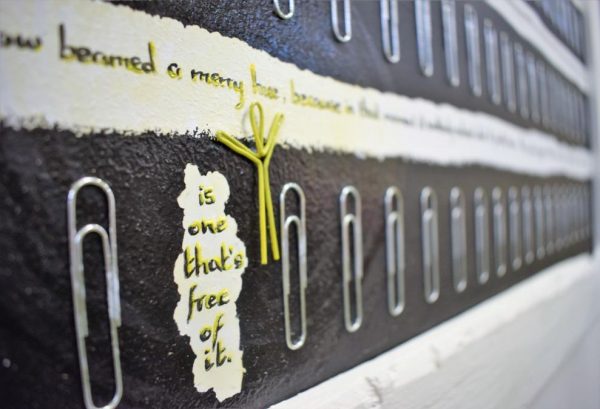 An arrangement of paperclips and an accompanying poem, which tells of a story of freedom. The poem reads:

Once upon a time, in the land of paperclips,
Where all the paper pieces are perfectly well-gripped,
There lived a group of grippers whose paper never slipped,
For each and every one of them was perfectly equipped.
They had an inny and an outy bit, with three bends along their length,
And all their bits would closely fit; it’s that which gave them strength.
The clippers’ clipping kept them busy, as clipping tends to be
A clipper’s only hobby in this land of clippery.


But there was one little paperclip who often wondered ‘why’,
(And ‘what’, and ‘how’ and ‘if’ and ‘but’) when it looked up at the sky.
The world seemed such a massive place, there must be more than this,
The world would never be so big, if clipping’s all there is.


One day our little clip was deep within its thoughts,
Stretching out to search the skies, where its answers might be sought.
It knew it wondered far too much, wonders only wrought it pain,
So it resolved to be the clip it was and get a grip again.
But to its shock, when it looked down it found that it’d come loose!
For in its thoughts, it’d stretched too far and overcome its use.
It zipped and snipped, it ripped and flipped to try to get its grip,
For what’s a pile of paper if it hasn’t got its clip!?
It bent and grasped, it buckled and clasped ‘til it began to sob;
It worried what it was without its clipping job.


After a while...
It let go of all its paper (which it no longer fit),
Then noticed all the other clips staring straight at it.
Now this clip appeared like none they’d ever seen!
(It certainly was not the clip it once had been).
It'd lost its bends and bent its bits and now beamed a merry hue,
Because in that moment it suddenly realised what it finally knew:
That a pile of paper’s still the same, without its paperclip,
But a clip without its paper...